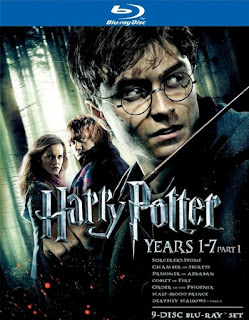 Are you having or hosting a Harry Potter movie marathon? I have heard rumblings around my house about having one although I'm not sure if it will happen or not.  The 17-year old who proposed the idea  is keen and he did once live through a Lord of the Rings movie marathon so it is not impossible although likely improbable that he will do the same with HP.

In case you need a reminder, the seven Harry Potter movies are:

And yes, if you want to buy all of the movies released to date,  they are available together in a boxed set called Harry Potter Years 1-7, Part 1, which is shown here. Amazon has the set on sale at almost 40 percent off and will ship it to you for free.

Buy all of the Harry Potter movies in a convenient and economical boxed set.
Harry Potter and the Half-Blood Prince movie review.