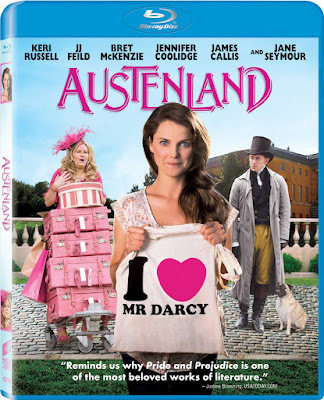 
The movie version of the book Austenland by Shannon Hale was released on August 16, 2013. I really enjoyed the book so I was anxious to see the movie but, alas, the movie turned out to be somewhat limited in distribution. It never made it to my local movie theatre although it did have a short run in another area of my home city, Ottawa. Anyway, I missed it at the movie theatre and it was not until after it was released on blu-ray disc and DVD on February 11, 2014 that I had the opportunity to watch it.

I wound up watching it while my husband was away. It would definitely not have been his first choice of movie and your man might not be keen on seeing it either. Anyway, I found it quite entertaining.

Austenland is a lightweight comedy starring Keri Russell, J.J. Field and Jennifer Coolidge. It shares the story of a young American woman who is unlucky in love and who embraces all things to do with Jane Austen and her books. Finding no real man who meets her standards, this young lady has even managed to fall in love with the fictional Mr. Darcy.

Desperate to make a change in her life, she books an expensive vacation at a Jane Austen getaway in England. At this resort, she will don clothing authentic to the period of Jane Austen's books and give up all modern conveniences and devices. Yes, she must even turn in her cellphone. She will live exactly as the women in the books did...more or less and the proprietor of the resort, played by Jane Seymour, guarantees that each guest will experience a love affair. Each women who visits Austenland has an actor assigned to fall in love with her.

The movie is funny and, like the book, it is light entertainment but if you love stories like Pride and Prejudice, Sense and Sensibility and Emma, you ought to like this movie. If you think it would be fun to try out living in the time frame of Jane Austen's England by enjoying fine dinners, going to balls and being swept off your feet, you ought to try out this movie first! Don't forget that life was not all good food and parties in that time period it also included things like corsets, endless hours of needlework and rules, lots and lots of rules about how a young lady must behave.

Here's a peek via the official two-minute movie trailer:

In terms of what to watch out for in this movie, there is some suggestive content and innuendo, some language, drinking and drunkenness. However, as an adult viewer, I was never uncomfortable watching this film and I would RECOMMEND it to my female friends who enjoy period fiction and romantic comedy.

You can check out Austenland on Amazon by clicking right here.

Will you watch the movie Austenland? 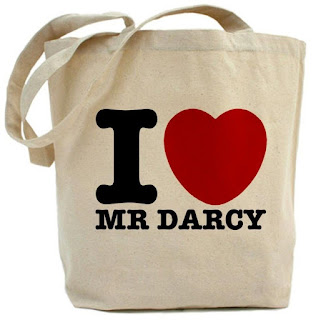 John Keats' Bright Star Movie Review
Bright Star is a period drama and romance based on three years in the life of the poet, John Keats.

Living as they did in the era of Jane Austen would take some getting used to. Hard to give up those modern conveniences we now take for granted! It would certainly be a different type of vacation. :)

For sure. The idea is romantic the reality not quite so.

Love the trailer. I think this could become a great "escape from reality" movie that I could watch over and over.

You know, Susan, I rarely watch something twice but I think this movie would be fun to see again. Thanks for your visit and comment.