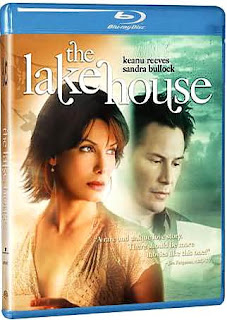 The Lake House Movie is an entertaining movie starring Keanu Reeves, Sandra Bullock and Christopher Plummer. Another time travel movie, another challenge to describe on paper.

This time travel movie uses a mailbox as a device to trigger the change of time between that of a lonely female doctor and that of an architect who live two years apart but find themselves in a highly unusual romance.

It's a chick flick that Amazon says is "a sweet, relaxed-paced, whimsical romance." I agree.

Barnes and Noble calls it "An old-fashioned, dreamlike romance."  I agree.

Definitely a romance movie. Sentimental. A love story.  It is definitely a girlfriend movie or a chick flick and would probably be a good 'date' movie although since this movie has long been out of the theatres, it will have to be from the comfort of your home theatre.

The chemistry between the Reeves and Bullock is pretty good and the soundtrack definitely caught my attention. I couldn't help but think it sounded a bit like the Beatles and, when I checked it out, I discovered lo and behold, that Paul McCartney is listed as one of the artists.

The blu-ray was released in September of 2006 which must make it one of the first blu-ray movies. (I'm not actually sure when they started making blu-ray discs.)  I watched The Lake House on DVD though so I turned to the experts at High-Def Digest to see what they had to say about the blu-ray disc.   In summary, they thought that the transfer was 'perfectly fine' and recommended the blu-ray for big fans of the romance genre, Bullock or Reeves.

As with most time travel movies, you have to be prepared for the time travel part to be less than logical for it will have you going, "but why didn't they..." If you can do that and you choose to check out this movie, I think you will be nicely entertained.

Buy The Lake House from Amazon on blu-ray or DVD.