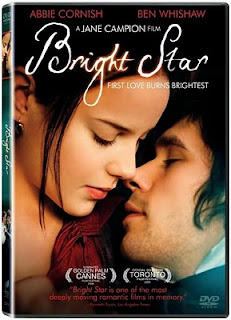 Bright Star is a beautiful 2009 period piece set in England in the 1800s, which tells of three years in the life of poet John Keats. A love story, it focuses on his romantic relationship with Fanny Brawne. Fanny was his ‘Bright Star.’

The film appeared in the 62nd Cannes Film Festival and was released to the public on May 15th, 2009. It does include the recitation of some of Keats’ poems including The Eve of St. Agnes and Ode to a Nightingale. However, I definitely do not think you need to be a fan of poetry or a fan of John Keats to fall in love with this movie.

Bright Star was based on a screenplay written and directed by Jane Campion who also directed The Piano and The Young Victoria. She took her inspiration from Andrew Motion’s biography of Keats and from letters actually written by Keats. Lines from those letters appear in this film.

Bright Star is considered exceptional in two areas including the wonderful performances put in by actors Abbie Cornish, Ben Whishaw and Paul Schneider who were, in my mind, perfectly cast, which resulted in a Best Supporting Actor award from the National Society of Film Critics.

The other area it is considered exceptional in is the way it presented life of the time period. As a result, the movie was nominated for an Academy Award at the 82nd Academy Awards for Best Achievement in Costume Design and it received awards for Best Technical Achievement For Cinematography from the British Independent Film Awards and a Truly Moving Sound award from the Heartland Film Festival.

I think anyone who loves a period piece, loves poetry or who enjoys a good love story will enjoy this movie. It is a quiet film and truly beautiful. Poetry lovers, of course, would take special enjoyment from Bright Star but, as I said earlier, I really do not think you have to be a poetry fan to love this movie.

If you have never heard of this film but I have managed to tweak your interest, you can read more about it and see the video trailer at my review of the Bright Star. If you are interested in buying it, you will find it nicely discounted on Amazon by clicking right here. I was disappointed to learn that this film was not released on blu-ray.