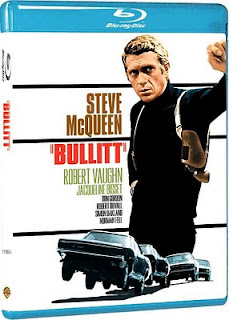 Set in San Francisco, Bullitt is a 1968 police thriller which won an Academy Award for Best Editing.  Starring Steve McQueen, Jacqueline Bisset, Robert Vaughn, Don Gordon and Robert Duvall and directed by Peter Yates, Bullitt includes a pretty famous car chase scene, set on the streets of San Francisco.
I enjoyed the police story and I really enjoyed Steve McQueen's roll. McQueen played a part that fit his image perfectly. I also enjoyed seeing all the other now-famous actors who appeared in this film.
The cars were beautiful, too, and included a 1968 Ford Mustang GT 390 CID Fastback in Highland Green (a car that that my 16-year old dreams of owning) and a 1968 Dodge Charger R/T 440 Magnum in Tuxedo Black. These automobiles really are nice to look at.
We chose Bullitt because it was a car movie. However, I would have to say that this one would not make MY list of the top 10 car movies of all time, if I had such a list. Even though the film (according to Wikipedia) contains one of the most "influential car chase sequences in movie history," the car chase is NOT a huge part of the movie.   It was enjoyable and entertaining but not nearly good enough to qualify for my favorite movies list.
The blu-ray disc? Blu-ray.com gives the blu-ray transfer a 3.5 out of  5 but says this about the movie, "Bullitt is an iconic representation of classic American muscle, both in its sinewy automobiles and the aloof charisma of Steve McQueen, its sex-symbol star."
Bullitt has also been deemed "culturally, historically, or aesthetically significant" by the National Film Registry. Both of these reviews are pretty good recommendations.

My recommendation? I would say if you are a film buff or a car fan, you might want to see this film because of its trip back into the 1960s. Lovers of good detective films or Steve McQueen would also enjoy it.

Given blu-ray.com's score, however, you might want to consider this movie on DVD rather than blu-ray.
See you
at the movies,
Brenda
Quick Links:
Order your copy of Bullitt from Amazon.