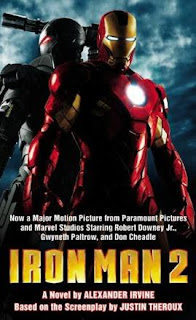 We went to see Iron Man 2 last week. My husband chose the movie as he was celebrating his birthday.  He was also interested in Robin Hood but liked the idea that there might be three less people at the theatre to see Iron Man 2 since it had been out a wee bit longer than Robin Hood.
Anyway, I have spent the time since then trying to decide if I liked Iron Man 2 or not and I would have to say the jury is still out. I did not dislike it and I liked the humour. However, I'm not quite sure about how I felt in the end...so I'm thinking maybe the story was a bit weak, that I would have enjoyed a bit more in that regard.

I'm off now to see what the experts had to say. Was it just me or was the movie a little, well, disappointing?

I'll start with my favorite movie reviewer, The Movie Mom.  She gave the film a B which is pretty respectable although not great. (A side note, she said the movie is PG-13 and recommended it for middle-school aged children because of the comic book violence, alcohol abuse and skimpy clothing.) She does go on to add that she considers it an entertaining summer movie but that it lacked the "exuberance of the original."  I'd agree.

The reviewers at Rotten Tomatoes gave Iron Man 2 another pretty good mark, overall. 75 percent.  Their consensus? "Iron Man 2 isn't quite the breath of fresh air that Iron Man was, but this sequel comes close with solid performances and an action-packed plot."  Remember with the first Iron Man movie, we were not too familiar with who Iron Man was so that added a nice dimension to the movie.
Gizmodo summarized with, "Iron Man 2 is not as good as the original Iron Man, but don't be so worried about some of those early, negative reviews—it's worlds, worlds, worlds better than Transformers 2, Spiderman 3 or some other franchise-devastating catastrophe. You'll still enjoy the movie a ton. Go see it already, just don't deconstruct it afterward."
Reading these reviews make my opinion seem a bit lower than the average so I'd like to say that if you loved the original Iron Man, you will probably enjoy Iron Man 2.  It was not in any way a bad movie, it just was not, perhaps, my cup of tea.

Let me know what you think...did you love Iron Man 2, did you hate it or were you kind of indifferent, like I was?