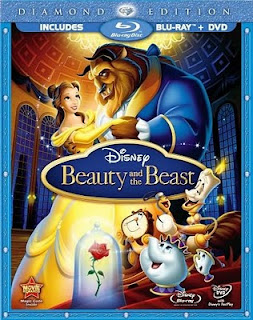 The Beauty and the Beast blu-ray movie has been very well received. So well received in fact, that it earned the number one spot on this year's list of The Best Blu-ray Movies for 2010 and it may well turn out to be Disney's best blu-ray movie of the year.
What makes it so special?  Well, start with the fact that the Diamond edition includes the blu-ray and the DVD. Add the technical information that the transfer to blu-ray is extremely well done; the soundtrack, amazing. Finally, throw in HOURS worth of extras.
The quality of the blu-ray combined with the quality and popularity of this Disney movie will make Beauty and the Beast one of the most desired animated blu-ray discs of the year. Will the sound of Belle's voice sing out from your surround sound system?

See you
at the movies!
Brenda
Click here to order your copy of Beauty and the Beast Diamond Edition Blu-ray from Amazon.