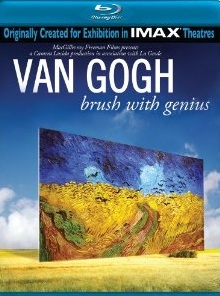 Vincent Van Gogh: A Brush With Genius is an interesting and educational look at the man, his artwork and the places that inspired him. This film, unlike many others, actually focuses on his art rather than his illness making it, I believe a bit unusual. It is a beautiful film that features incredible quality since it was created to be shown on Imax screens.

I've always had a fascination with Vincent Van Gogh and I love many of his pieces of art. I knew little about the man and enjoyed my role as an armchair traveller recently when I watched this film. I think it would be of interest to anyone who loves learning about famous artists, good for classroom use and particularly good for anyone travelling to Amsterdam (where the Van Gogh museum is) and/or any of the other sites that Van Gogh is noted for working from.

That is, by the way, exactly how the film proceeds. It shows the making of this film and travels to many of the sites that Vincent Van Gogh painted in. An interesting trip to Europe could be one that followed in the footsteps of the artist and this film. I know I would have enjoyed seeing this documentary film BEFORE I went to Europe and visited the Vincent Van Gogh museum.

Buy your copy of Vincent Van Gogh: A Brush With Genius
Vincent Van Gogh's Ominous Wheatfield With Crows Intrigues...
What Sights Can You See In Two Days In Amsterdam, Netherlands?