Johnny Depp in The Man Who Cried (2001) Movie Review 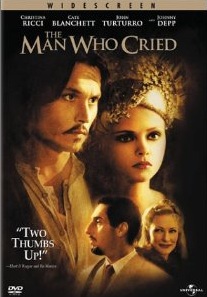 The Man Who Cried is a 2001 film with an all-star cast that includes Christina Ricci, Cate Blanchett, John Turturro and Johnny Depp. If you enjoy Johnny Depp, you will definitely want to see this movie, even though he is not the main character. He may not have been the main character but he was definitely unforgettable in this bittersweet film and I thought he even came close to stealing the show.

The Man Who Cried starts out in 1927 in a small Russian village with a young girl who becomes separated from her family and winds up raised in England by an English family. As a singer and dancer, she winds up in living in Paris where she is increasingly unsafe as the Nazi Germans gain strength.

Throw into the story an unscrupulous operatic tenor, a cabaret dancer and a mysterious gypsy stranger and you have a beautifully done movie, an “alluring tale of passion, intrigue and betrayal.”

I loved it, though I see by mixed reviews online, which means that this movie is not for everyone. If you love Johnny Depp and you enjoy romantic movies with a historic bent, you should enjoy The Man Who Cried.

I watched it on an old VHS tape and wished for better because the film was beautiful and I found myself imagining how lovely it would be if it were cleaned up on blu-ray disc. However, it turns out that The Man Who Cried is not available on blu-ray. It is, of course, available on DVD from Amazon by clicking right here.