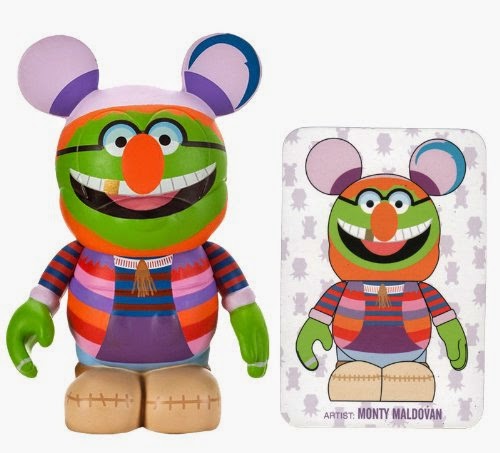 In 2008, Disney released a series of collectible figures known as Vinylmation. Each figure is shaped like Mickey Mouse but resembles a different character from Disney's movies and theme parks.

For each series there is a set number of figures. Most are known but some are not and those that are unknown are called the Mystery Chaser of the series. Some figures are sold in a blind or mystery box and you do NOT know which figure you are buying when you purchase it.

These figures include the beloved characters from The Muppets. These Muppet figures are cute and fun collectible Disney items, perfect for any Muppet fan's collection. My favorite might just be the Dr. Teeth Muppet Vinylmation shown here! How can you help but love him? He is so colorful!

FrogFan76 interrupts us with this short video to present his very special newsflash:

The first series was released in 2008. The figures included Miss Piggy, Fozzie Bear, Statler and Waldorf, Bean Bunny, Rowlf the Dog, Beaker, Sweetums, Dr. Bunsen Honeydew, Rizzo the Rat, The Swedish Chef and a tuxedo-wearing 55th Anniversary Kermit the Frog.  Check out these figures from Series 1 and eBay:


Aren't they cute? Do you collect The Muppets Vinylmation figures or The Muppets in any form?

Brenda
Treasures By Brenda
You never know what I
might have in store for you!

Click here to order your Dr. Teeth The Muppets Vinylmation figure from Amazon.

Love the Swedish Chef? Check him out here.