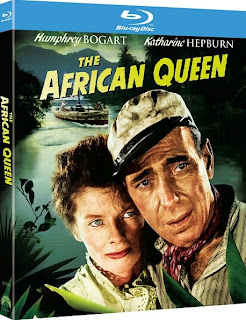 March 23rd, 2010, is the official and much-anticipated date of the release of The African Queen on blu-ray and DVD. Classic film lovers have been anxiously awaiting this release for a long, long time.
C.S. Forester wrote the novel, The African Queen, in 1934 and, in 1951, the novel was made into the movie starring the legendary Humphrey Bogart and Katharine Hepburn. The movie opened on December 23rd in order to be eligible for the 1951 Oscars and Bogart won an Academy Award for Best Actor in a Leading Role. The film also received nominations for Best Actress in a Leading Role, Best Adapted Screenplay and Best Director.
The story is one of romance and adventure, of love and of human character. It is set in Ceylon and tells the story of a grumpy bachelor and his female opponent. The adventure is against all of the elements found in Africa, World War I and each other. Of course, love and character win out in the end.
The movie was released on Region 2 DVD in parts of Europe but only available in North America on VHS and Laserdisc. There is a Region 1 (North American) DVD version available. However, what I have read indicates that it is questionable on two counts, one based on quality and the other whether or not it is an authorized disc.
If you have been watching The African Queen on an old VHS tape or only when it shows up on television reruns, you are probably anxious to view the fully restored version which will be available in just over three weeks.
If you haven’t seen The African Queen at all and you enjoy classic movies, you should see this one for which Humphrey and Bogart occupy the Number 1 spot on the American Film Institute’s list of the greatest American screen legends of all time.
Will The African Queen be one of the best blu-ray movies of 2010? If Paramount does it well, I am sure it could be...but only time will tell.
See you
At the movies,
Brenda
Quick Links:
Click here to order The African Queen on Blu-ray or DVD.

Amazon offers a pre-order price protection policy which guarantees that you will pay the lowest posted rate between now and the date your order ships. Amazon has already discounted this movie by 30 percent plus they offer free shipping on orders worth $25 or more. A couple of great reasons to consider ordering movies through Amazon.

I'm anxious to read the review of The African Queen on blu-ray. I hope it is done well; this wonderful classic movie deserves a new audience.