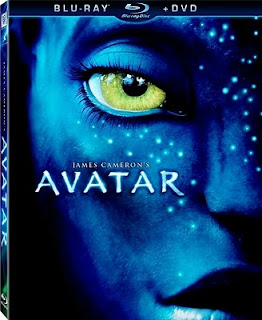 Are you wondering if the story in James Cameron's Avatar movie is as good as the effects? I was and I did a little research on Twitter and Facebook when I was trying to decide if I should go to the movie theatre and see this movie or not. I needed to know that there was a good story involved, too.
After all, I had already seen Tim Burton's Alice in Wonderland this past week. Two movies, and especially two 3D movies, in one week is a lot but it was March Break and my son was asking if I wanted to go...
The results of my informal research indicated that I should go. Friends from both Tweeter and Facebook said that it WAS a good story. The Movie Mom's review went along with what my friends had to say and finally, the longer trailer (which shows more of the story than the first) clinched my decision and off I went.

(Unfortunately, there was NO popcorn involved.)

So, what did I find?

Well, there is no question in my mind that Avatar is a stunningly beautiful movie. I believe that James Cameron accomplished his goal of producing the most technically advanced movie ever.

And the story? It was good, too. It was a human story of a young man trying to save an alien tribe from his fellow human beings. There was plenty of action and adventure and there was compassion, too.

Would I recommend Avatar? Yes, I would. I would say run to the movie theatre and see it on the big screen with 3D glasses while you can.

If it is too late for that, relax because you can already preorder it from Amazon and you will only have to wait until April 22nd to see it as that is the release date for the blu-ray and DVD discs.

Oh, and by the way, this was the first 3D movie that I have ever seen where I actually FORGOT that it was 3D. That is rather important, too.

Order your copy of Avatar from Amazon on blu-ray or DVD.
Read a longer review of Avatar and watch the movie trailer.