Imax Under The Sea 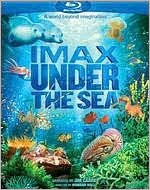 Imax Under the Sea is one of Imax's very successful nature films and deals with life under the sea in some very exotic locations including the Great Barrier Reef and the South Pacific. It will be available on blu-ray and DVD on March 30th.

If you enjoy nature documentaries and Imax films, you might want to pick this one up.  Howard Hall leads the group that worked together to create the successful Imax films Deep Sea and Into the Deep and Jim Carrey provides the voice.  Reviews of Carrey's narration are good.

The advance review of the blu-ray disc by blu-ray.com says that the Audio and Visuals of this film are quite stunning; the special features, unfortunately, lacking.

Imax's Under the Sea is, of course, suitable for children. However, be warned that there are some startling scenes, that the creatures eat each other, that mating habits are shown and that the threat of global warming is discussed. The 40-minute runtime of a nature documentary film might also push the limits of the youngest children.

Another great Imax film to add to your nature movie collection.