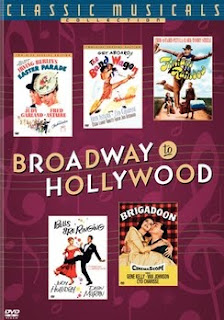 Finally, the Finian's Rainbow movie review I promised.  I finished the movie last night and I have not stopped thinking about it.  I am fascinated by the background of this story.

Fred Astaire received mixed reviews from the media for his performance in this film but remember, he was an older man playing an older man.  Perhaps his role could have been done differently by someone else but I think he was simply 'right' for the role.

Tommy Steele was considered by some to have over acted the leprechaun and I will admit to finding him a  bit strong at the beginning but you know, by the middle of the movie, he seemed well, just right.  Outlandish...but what else would you expect from a leprechaun turned human?

Petula Clark received praise for her role in this movie and she was wonderful.  Her voice was angelic and she could dance, too.

I really did enjoy this movie.

It was dated and yes, my 16-year old took one look at the set and exclaimed, "That's fake." Despite the apparent fakeness, the set still managed to be beautiful, lush and green.

It may not have been Astaire's finest dance performance but there was plenty of fine dancing from him and the entire cast.  He was, after all, 69 when he made this film.

Finally, the movie included an fun storyline with a nice dose of humour.  Just the way I like my movies with this one being perfect as St. Patrick's Day approaches.

If you are interested in watching it, you might choose to order this Classic Musicals Collection Broadway to Hollywood which includes Finian's Rainbow plus five other great movie musicals including Easter Parade, The Band Wagon, Bells Are Ringing and Brigadoon.
And if you watch Finian's Rainbow, make sure to watch the special feature of the broadway opening of the movie in 1968 in New York.

Yes, it was a good movie. I think really all the cast were good.

Pet Clark took the songs are made them work, as only Pet can do. I wonder how on earth she got away with 'wow yeah' in Ol' Devil Moon.

Maybe because she was Petula Clark, and what she said went.... not to mention what she sang sold.

She still sings Look to the Rainbow in concert... with a different, more Irish arrangement.