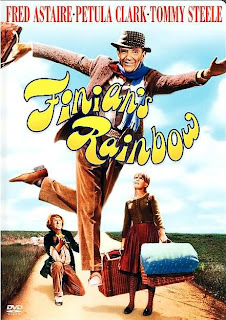 How about a musical leprechaun movie for St. Patrick's Day? Finian's Rainbow is beautiful to look at and lovely to listen to.

The storyline features a girl-meets-boy plot with a father and a leprechaun in the mix. Throw in lots of singing and dancing and a few humorous moments and it turns into a pretty entertaining movie.

Based on a 1940's Broadway musical, Francis Ford Coppola produced this movie in 1968. It starred a a sixty-nine year old Fred Astaire, Petula Clark, Tommy Steele and Don Francks and was considered dated even when it was released. However, it is considered worthy based on the musical score and because it deals with the subject of racial prejudice. (I have fallen for the original movie soundtrack.)


Movie musicals had gone out of style at the time of this release and Finian’s Rainbow received mixed reviews. Critics considered Astaire aged; Steel, who played the leprechaun, overdone. Praise was given for Clark, who sings like an angel.

Roger Ebert liked the film, however, and said that it was "the best of the recent roadshow musicals…Finian's Rainbow knows exactly where it's going, and is getting there as quickly and with as much fun as possible…it is the best-directed musical since West Side Story. It is also enchanting, and that's a word I don't get to use much…it is so good, I suspect, because Astaire was willing to play it as the screenplay demands…he…created this warm old man...and played him wrinkles and all. Astaire is pushing 70, after all, and no effort was made to make him look younger with common tricks of lighting, makeup and photography. That would have been unnecessary: he has a natural youthfulness.”

Tomorrow, I will finish watching the movie and I'll report back.

See you
at end of Finian's Rainbow!
Brenda

Hello Ms. Brenda, This is Meet here, and u left your comment for my blog A Poster Says A Thousand Words on foreshadowpicturesblog.blogspot.com... Wantd to thank you for the same as i've just started writing blogs and any word of appreciation comes as encouragement.