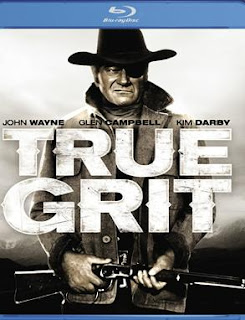 Literally just in time for Christmas comes the 1969 John Wayne True Grit blu-ray movie. I think it creates the possibility of a magnificent Christmas gift for anyone in your family who loves John Wayne movies and owns a blu-ray player.

Simply buy a copy of John Wayne's True Grit movie on blu-ray and add a movie gift certificate for the new 2010 True Grit movie which opens in movie theatres on December 25th and you have the makings of a very nice Christmas gift for any western movie fan.

You can preorder your copy of True Grit on blu-ray from Amazon, where they have already reduced the price by almost 30 percent. Amazon's preorder guarantee means that if the price goes down between now and December 14th, you will receive the lower of the two prices. This movie qualifies for release-day delivery, which means it will be delivered to your door on the day it is released and Amazon will even gift wrap it for you, if that helps.

Unfortunately, it is too early to know what the experts think of this blu-ray movie release in terms of blu-ray quality.  For that information, we will have to wait a tiny bit longer but we do know that True Grit featured John Wayne in one of his most memorable roles and that it is the movie for which John Wayne won his only Academy Award. Not to mention that many people will want to be comparing the original True Grit with the remake of True Grit.

As you know, this is one of my favorite movies. I hope the blu-ray edition turns out to be well reviewed. Having an up-do-date version will make it easier to compare this version with the remake, which I can't wait to see.