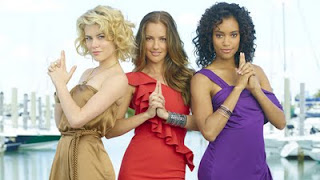 Undoubtedly, some are going to be much more interested in the new Charlie's Angels series of 2011 than I. I expect this series is going to appeal to my husband who was a huge Farrah Fawcett fan and to my sons who love anything action packed...

The plot looks much the same -- three young and attractive female private investigators in Miami taking directions from a boss named Charlie who we never actually meet who is assisted by Charlie's loyal man, John Bosley.

Charlie Townsend is voiced by Robert Wagner and Ramon Rodriguez is played by John Bosley.

Be sure to let us know what you think. Were you a fan of the first Charlie's Angels series? The movies? Does this television show appeal to you?

I didn't know there was a new Charlie's Angels series. Interesting! Maybe the success of the new Hawaii 5-0 contributed to the decision to reprise this series. I never watched the old one, but I might give the new one a try. It looks fun!