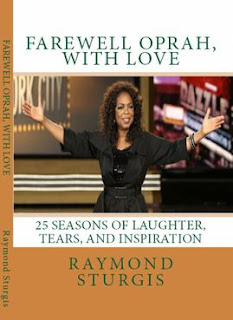 Whether you are an Oprah fan or not, you cannot help but have heard some of the media buzz about the last Oprah Winfrey show ever, which is bearing down upon us very quickly.

Thirteen thousand people attended an event called Surprise Oprah! A Farewell Spectacular last Tuesday for the filming of the final show in Chicago, which, by the way, is where Oprah's show had its humble beginnings.

The celebration included a look back at the last 25 years of Oprah's show and included the likes of Will Smith, Tom Cruise, Beyonce, Katie Holmes, Maria Shriver and Halle Berry.

I have not been following the prolonged goodbye season but I did manage to see the show on which Johnny Depp made his appearance. He toasted Oprah and gave the audience a most unique gift -- the world premiere of the new Pirates of the Caribbean on Stranger Tides movie AND he attended with them. (That is one Oprah Winfrey gift I would have received.)

The last show? It airs this Wednesday, May 25th, 2011 and might be an interesting one to check out if only so that you can say you saw THE LAST OPRAH WINFREY SHOW.