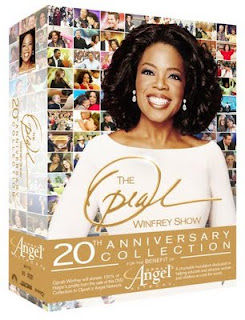 In this set you will see what Oprah has to say about some of the guests on the Oprah show. Hear her candid thoughts. Learn about the beginnings of the show. Hear about she calls her 'light bulb moments.' Watch as she interviews the likes of John Travolta, Julia Roberts, Barbara Walters, Bill Cosby, The Judds, Madonna, Halle Berry, Michael J. Fox, Beyonce, Chris Rock, Celine Dion, Jim Carrey, and Bono. See Oprah's makeovers and visit her home.

This is a 2005 DVD boxed set, relevant and fascinating for anyone interested in Oprah since it is packed with insight into the world of one of the most popular and richest women in America.

If you love Oprah, you should check out The Oprah Winfrey Show 20th Anniversary Collection.

As an added bonus, when you buy this DVD set, you will be doing a good deed since the profits go to Oprah's Angels Network.

For my blu-ray fans, I am sorry to have to report that this DVD set is NOT available on blu-ray disc. We can only hope that Oprah will put together a new collection covering the years since 1986 and release it on blu-ray

Order your copy of The Oprah Winfrey Show 20th Anniversary from Amazon.
Read about some of the fascinating guests who have appeared on Oprah's show.