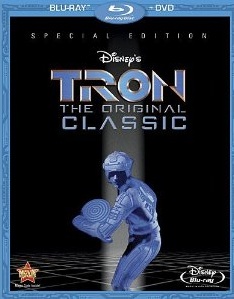 Last night we watched the 1982 version of Tron, which Disney calls TRON CLASSIC. Some might argue that it is not really a classic movie, and I’d agree, although at least now we can stop calling it the first Tron movie.

I’m not sure what I expected but I guess I would say a dated movie, and it was that. Most notable for me were the uniforms worn by the characters inside the computer. However, a few minutes after they donned the suits, they seemed okay or right to me. And I have to comment on the eyeglasses. Did people really wear eyeglasses that were that big in the 1980s?

The critics received Tron in 1982 with mixed feelings. They liked the cinematography and the acting but not the plot. If you go into this movie knowing that the storyline is not its strong suit, you will be well prepared. It is supposed to be about good versus evil and it is but it really stands strong as a movie about style rather than substance and that’s okay, too. As a matter of fact, I would say that works for Tron Legacy as well and remember: the original Tron movie was considered state-of-the-art in its day.

Blu-ray.com calls Tron Classic a trip down memory lane. The movie itself is not without its faults they say, but the blu-ray transfer is very well done and worth viewing.