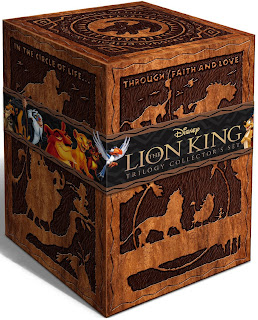 This fall, Disney is bringing The Lion King out of The Vault. However, they are first bringing a new and different version, a 3D version, to movie theatres for two weeks before they re-releases the movie on blu-ray disc, blu-ray 3D and DVD.

All of the versions, of course, are available for purchase already from Amazon by clicking right here.

The Lion King Trilogy, as shown here, is the package that caught my eye. 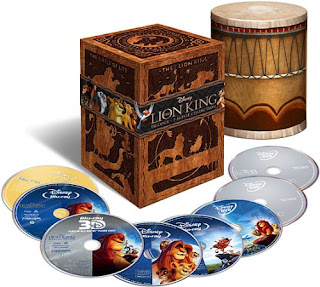 It also includes special features with the two other movies.

The Lion King 1-1/2 features Timon and Pumbaa's Vacation Safari, deleted scenes, Timon: Behind the Legend, Before the Beginning: The Making of The Lion King 1 ½ and a music video.

The Lion King 2 features include Timon and Pumbaa's Insectapedia, an animated short called One by One, Proud of Simba's Pride, Timon and Pumbaa: Find Out Why and a music video.

Amazon already has the trilogy boxed set discounted. I will not quote the price here because it is subject to change but I will say that the sale price is pretty good when you consider what is included with this attractively packaged, eight-disc gift set. When you look at the prices of the three individual Lion King movies on DVD right now, this boxed set becomes a very good deal indeed. (And do not forget that Amazon will ship it for FREE.)

If you want to upgrade your copy of The Lion King or perhaps buy it for the first time on blu-ray, I think The Lion King Trilogy is the way to go.  It is way too soon to be thinking of next Christmas but I would be willing to bet that this will be a top-rated movie gift choice next Christmas.