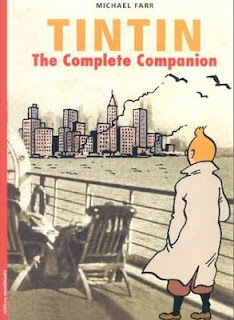 My husband came into the room when I was watching The Adventures of Tintin 2011 movie trailer and raised an eyebrow as he is known for doing. (You can watch the trailer on my previous post by clicking here,)

I told him that I was watching the trailer for the new Tintin movie that Steven Spielberg and Peter Jackson are doing and my husband's eyebrow went up a tiny bit higher. He commented that it seemed a bit odd for Spielberg to be doing an animated movie so I went looking to find out why Spielberg is bringing Tintin to the movie screens this year.

It turned out that the answer to that question is fairly simple and straightforward. Steven Spielberg became a strong fan of The Adventures of Tintin comic books when he read about them in a review that compared Raiders of the Lost Ark to Tintin. He was presented with a set of the French books and it did not matter that he could not understand the words. He fell in love with the artwork.

Michael Farr, author of the book Tintin: The Complete Companion said that Spielberg was the only one who could bring the books to life. Let’s hope that Farr was right and that Steven Spielberg pleases the Tintin fans. Until then, I am going to get my hands on a copy of the book and see what Tintin is all about.

Order your copy of Tintin: The Complete Companion from Amazon.

My boys loved all the Tintin books as they were growing up (teenage age). They were a great choice for my history and adventure lovers. Even I am looking forward to the movie. Hope my guys can go watch it together!

I hope you can all go together, too. I know how hard that is to do once your children have grown up. Thanks for your comment, Susan.