How to Lose a Guy in 10 Days Movie Review 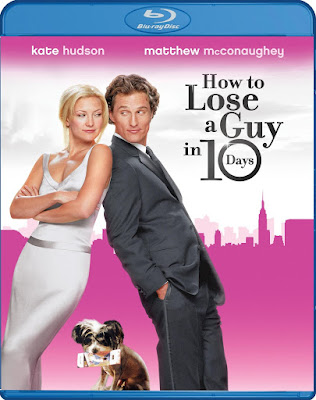 After having recently watched and reviewed Matthew McConaughey and Kate Hudson in the 2008 movie Fool's Gold,  I happened across How to Lose a Guy in 10 Days when I was changing the channel. Knowing that some critics claimed Fool's Gold an effort on behalf of the studio to capitalize on  the popularity of the actors in How To Lose A Guy in 10 Days, I was more than a little curious about this movie and settled in to enjoy the show.

How to Lose A Guy is based on a short cartoon book by Michele Alexander. It shares the story of a female magazine writer assigned to date a young man and to make all of the mistakes that women supposedly make that drive guys away and, of course, to write a story about her experience.  However, the guy she chooses is an ad executive who is in the middle of a bet that he can make a woman fall in love with him within 10 days. Hence the tagline, "One of them is lying. So is the other."

I laughed out loud.

Definitely a lightweight, enjoyable movie, a romantic comedy. High-Def Digest was quick to point out that this is one chick flick that attempted to please the GUYS who would have to watch it. And, despite it's lack of critical success, when I laugh out loud that generally means that I enjoyed a movie. Note that How to Lose A Guy is rated PG-13 but has some pretty strong sexual references and language for that rating.


And yes, Kate Hudson is the daughter of Goldie Hawn and it seems they are just a little bit alike...

Order your copy of How to Lose a Guy in 10 Days from Amazon.

I really loved the movie too: enough to watch it several times, always a good way to measure how much I like a movie. I think it's simply funny. Also there is beliebpvable chemistry between the main characters.