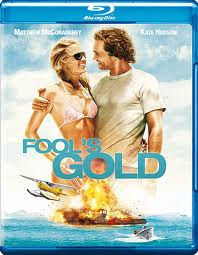 I stumbled across Fool's Gold quite accidentally last night when I could not sleep. I've learned my lesson not to start watching a movie in the middle of the night because it is quite possible that rather than putting you to sleep, the movie will make you stay awake for a full two hours...but I digress.

A bit of online research shows that Fool's Gold was not very successful, particularly with the critics who say that it was an attempt to ride on the success that Hudson and McConaughey had in How to Lose a Guy in Ten Days. Nevertheless, I enjoyed Fool's Gold. It was a fun piece with plenty of humorous moments and I think it is quite possible you too will like it if you like romantic comedies and if you approach it simply as light entertainment, rather than looking for a top-rated movie.

The critics? Well, here is a sample of what they had to say:

High-Def Digest said it is but another unsuccessful example of Hollywood using popular lead actors rather than a great script.

Blu-ray.com says that despite an attractive and charismatic pair, the movie is somewhat trite. They do say that the tropical scenery makes it worth viewing, if not owning.

At Rotten Tomatoes just 11 percent of the critics liked it. However, 53 percent of the audience who participated in the poll liked it so perhaps it is worth watching...

Have you seen Fool's Gold? What do you think?

Buy Fool's Gold from Amazon where the DVD is less than $5 and the blu-ray less than $10.