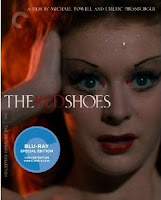 The Red Shoes is a 1948 technicolor musical set in the south of France, which features Oscar-winning sets and music, amazing performances and cinematography. The story is a dramatic love story in which Moira Shearer makes her debut as a ballerina on a rising star who has to decide between a composer and an impresario...

The Red Shoes was one of the best blu-ray movies of 2010.  Blu-ray.com said that The Red Shoes should be an addition to all film libraries and VERY HIGHLY RECOMMENDED it.


"The Red Shoes is a classic motion picture which has received superlative reviews. Even though it is a bit dated, it stands as a monumental cinematic experience for most viewers unless they cannot abide ballet. This restored version of the classic movie has been lovingly restored to effectively eliminate what time has done to deteriorate the original film material. The result is this BluRay masterpiece. This BluRay version, then, would be one of my choices if I was stranded on a desert island. It stands as one of the best movies ever made."
To see all of the Amazon customer reviews for The Red shoes, click here.

Watch the movie trailer and see what you think:

I haven't checked out The Red Shoes yet but it is on my list. How about you? Have you seen The Red Shoes? Are you curious?

Buy your copy of The Red Shoes on blu-ray from Amazon.
Visit The Top 10 Blu-ray Movies of 2011.