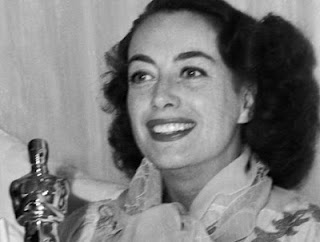 Her win at the Academy Awards was for her role in the 1945 movie, Mildred Pierce.

She won the Oscar after a string of poorly received movies and actually did not believe she would win.

Hollywood lore has it that she pretended to be sick in order to skip the presentation.

When she won, she invited the newspaper reporters into her home and received the Oscar in bed. She said, "Whether the Academy voters were giving the Oscar to me, sentimentally, for Mildred or for 200 years of effort, the hell with it -- I deserved it."

I can recommend Mildred Pierce both the Joan Crawford Academy Award winning version, the HBO miniseries with Kate Winslet AND the book by James M. Cain.