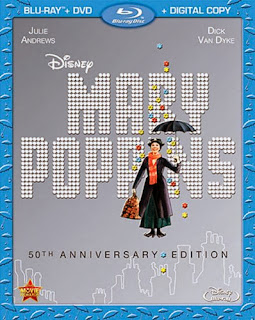 Mary Poppins is being released on blu-ray disc for the first time and re-released on DVD just in time for Christmas and for the exciting new Disney movie titled Saving Mr. Banks. Those of us who watched the movie Mary Poppins over the past 50 years and have fond memories of doing so will be anxiously awaiting this release.

The movie Mary Poppins won five Academy Awards when it was released in 1964, including the Oscar for Best Actress for Julie Andrews and as we all know, the movie has had tremendous staying power.

As this video trailer for the December 10, 2013, blu-ray release says, Mary Poppins is the ultimate Disney classic.

The trailer looks brilliant, don't you think? If you are a Mary Poppins' fan, this trip down memory lane will give you goosebumps. It did me!  Not only is this release ideal for existing fans but it is the perfect opportunity to introduce a classic Disney movie to the youngsters in your life.

Pre-order your copy of Mary Poppins on blu-ray or DVD from Amazon. As always, Amazon will protect you from price increases between now and the release date with their price guarantee and don't forget that Amazon ships orders worth $35 for free.