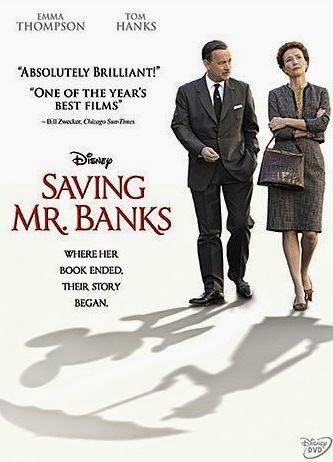 We enjoyed the movie Saving Mr. Banks last night. It is a movie that has been on my list for awhile given my interest in the history of Walt Disney's world but it did take us awhile to get around to seeing it.

Saving Mr. Banks tells two stories. It shares the story of how Walt Disney collaborated with P.L. Travers to let make the Mary Poppins book into a movie and of Travers' childhood.  It is therefore set in Hollywood, California, in the 1960s and in remote Australia in the early 1900s, where Travers grew up.


I think Saving Mr. Banks was nicely done and should appeal to any adult who enjoys a sweet movie.  I only say adult because I am not sure that the storyline would appeal to children. There's absolutely nothing 'adult' or objectionable in the way of violence, sex or swearing in this film.  If you're a fan of Disney, you will likely enjoy this film. If you love the Disney Parks, you will likely really enjoy the brief visit within this movie to Disneyland.  Saving Mr. Banks will also appeal to people who are interested in things retro and vintage, like the style of the 1960s.

A couple of things to note from the movie that will make you smile:

First, did you spot the Hidden Mickey in the cover art here on this page? If you didn't look again and you'll quickly see what I mean. To be perfectly honest, I just noticed it myself. CLEVER, don't you think?

Second, when you watch the movie there is a car that keeps showing up in the background. That is, a car other than the Lincoln that chauffeured Travers around and that actor Giamatti actually drove himself. (More about his driving accomplishment here.) My husband noticed the repeat appearances of one car in particularly and it definitely seemed odd but I have been unable to find out WHY that same car keeps showing up in different scenes. Was it an accident or was it deliberate? I don't know.

If you're interested, you will find more goofs from Saving Mr. Banks here on IMDb.

Anyway, I would recommend Saving Mr. Banks because it is a peek into the history of Disney and of the making of the movie version of Mary Poppins.  It is a nice movie, not likely to offend. RECOMMENDED.