The Old Man and the Sea by Alexander Petrov 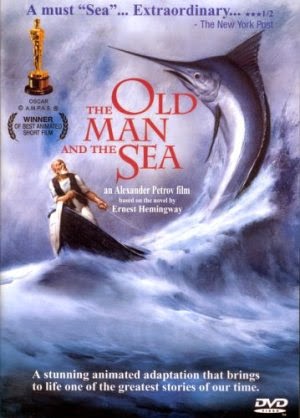 The Old Man and the Sea is an animated film, which I first encountered and enjoyed at the Imax theatre a number of years ago.

Being animated, it is obviously different than the normal type of Imax film we are used to watching. It is a beautiful twenty minute retelling of Ernest Hemingway's novella, which shares the story of the friendship between an old fisherman and a young boy and the hardships of the sea.

It took two years for Alexander Petrov to put this film together in a manner which included all of the color, imagery and emotion that were in the original work.  The Old Man and the Sea went on to receive an Academy Award for Best Animated Short Film in 2000.

The character Santiago is well voiced by Canadian Gordon Pinsent.

"Each scene is vibrant with life and the film as a whole has a dimension of profound imagination, as Hemingway's masterpiece has." John Rossfeld said, "Our six year old was in awe. Literally. He really loved seeing the images painted (by fingers) onto glass. These reviews are right - it is a wonderful way to introduce children to Ernest Hemingway AND the beauty of animation." A different Imax experience for sure, but an interesting one, too.

It is a short film but the DVD also includes the story Hemingway: A Portrait and a Making of feature. Unfortunately, it is hard to find  a copy of this film. As I write this, it is available at a premium on Amazon by clicking right here.

Buy The Old Man and the Sea from Amazon.