Imax Under The Sea Nature Documentary 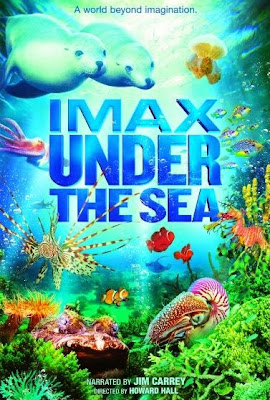 Imax's Under the Sea Will Swim Into Your Family Room...

Under the Sea is a film worth being excited about, particularly if you love nature documentaries. This one, of course, highlights the world beneath the sea. Originally released in Imax theatres on February 13th, 2009, it was released on March 30th, 2010, on blu-ray and DVD and there is also an audio CD soundtrack available.

Howard Hall leads the same team that created Deep Sea and Into the Deep and this time he takes you on a tropical adventure which includes the Great Barrier Reef and other South Pacific regions.

Jim Carrey is the voice behind the action which will have you up close and personal with a Great White shark and enjoying the doings of a cuttlefish in love.

Come on, let's go Under the Sea via this short trailer where excitement and fun run deep...

The film received 95 percent positive reviews from the tomatometer on Rotten Tomatoes. That's an almost perfect score and Under the Sea received comments like, "The footage is spectacular, the colors electric, the life aquatic trippier than anything you have ever seen..."

About.com said, "Under the Sea offers a uniquely inspirational and entertaining way to explore the beauty and natural wonder of the oceans." 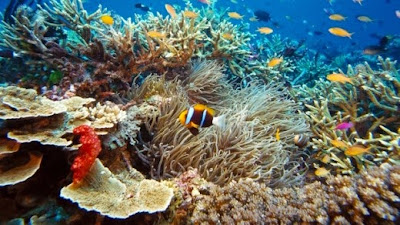 Blu-ray.com reviewed the blu-ray version of Under the Sea and said that this film is "bubbling to the surface with a magnificent 1080p/VC-1 transfer...blessed with a stunning source and a proficient presentation...immersive DTS-HD Master Audio 5.1 surround track; one that does justice to Hall's lively soundscape, New Guinea and Indonesia's enveloping waves, and Micky Erbe and Maribeth Solomon's diverse music." They said this is a film worth buying on blu-ray.

With regard to the 3D version of Under the Sea, Film Journal International said that, the 3D version makes you feel like the animals are right there in your lap and that children are often seen trying to pet the screen. 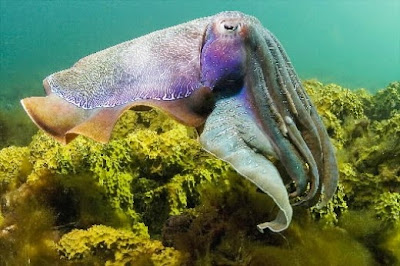 Under the Sea is recommended for children who are six-years old and up. It has scenes that are startling like when one fish eats another or when a creature snaps. Mating habits and global warming and the danger it presents to us all are discussed. These considerations aside, your child must also be old enough to sit through a 40-minute documentary film. In the case of the 3D version, they must be old enough to wear 3D glasses for that length of time.

If you would like to read more about Under the Sea, you can visit Imax's official website by clicking here. Enter through a beautiful portal and you will find more information about the film. Alternatively, you will can learn more about it on Amazon or order your own copy, by clicking right here.

Like most Imax films, it is fairly short and you will come away wanting more...

See you
Under the Sea!
Brenda

Click here to order your copy of Imax Under the Sea from Amazon.

Please note this page was originally written and published on another website in 2010.