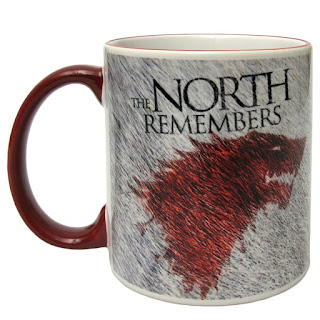 This Christmas we gave the gift of A Game of Thrones, LOL. One son asked for two items in particular and he asked and **POOF** he received because we always give him what he wants...no, that's not true at all! Now that my two sons are grown up, they don't generally ask for anything specific for Christmas.
This year when asked the first son said he wanted boxers and yes, he did receive some boxers. They were NOT Game of Thrones themed but they certainly could have been!
The other son asked for coffee mugs that would fit in his coffee machine and a very specific t-shirt. If you guessed that the specific t-shirt was from the Game of Thrones, you were right and the request for that shirt also led to a Game of Thrones coffee mug, as a matter of fact the "The North Remembers" mug shown right here to the left of this text.
In the end, we decided that we WOULD purchase those two A Game of Thrones (AGOT) things for BOTH of our 'boys' for Christmas and we are big board gamers so we added a copy of the popular Game of Thrones Board Game from Fantasy Flight Games.
Combined, you could say these items made an official Game of Thrones Christmas or at the very least a very nice AGOT themed gift set!
You, too, can put together a similar gift set for someone you are buying for either at Christmas, a birthday or at another special occasion. On this page, you will find a few of the best Game of Thrones themed gift ideas we found when we went shopping for our sons.

A Game of Thrones Coffee Mug

A coffee mug is an affordable, practical gift idea. 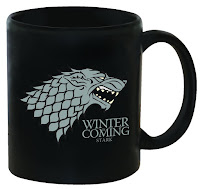 This is what started our Game of Thrones themed Christmas giving. One of our sons asked for a Game of Thrones-themed coffee mug that would fit in his single-serving coffee machine. When we went looking, we saw many nice mugs and eventually chose the one shown above. We love the combined practicality and affordability of giving a coffee mug and the fact that it can be customized to suit someone's interests. In this case that was, of course, A Game of Thrones. 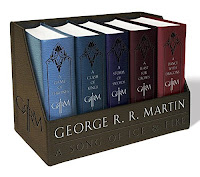 Of course, true Game of Thrones fans might already have read the books but if your fan has not, the books make an amazing gift idea. Of course, you could pick a single book or, for a really special gift, you could choose a complete Game of Thrones leather bound book set.
One of our sons is working his way through the books. He has to squeeze a bit of reading time in around his university studies and his Quidditch playing. It is going to take him awhile to get through all of the books but that's okay as long as he is enjoying them!
My sister-in-law HIGHLY RECOMMENDS these books. Her only issue with them is one that fans around the world can be heard saying..."When will author George R.R. Martin get on with it and get the next one written? 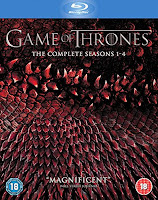 Every fan will want to watch A Game of Thrones more than once and adding a quality blu-ray and DVD release to their collection will enable them to do so. As I update this page, seasons one through four are available in a single boxed set, as shown here to the right.
If your Game of Thrones fan does not already own the series, this boxed set that includes seasons one through four on blu-ray disc would make the ultimate gift idea. 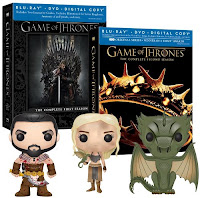 We were surprised to learn that the boxed set shown on the left for seasons 1 and 2 with the Funko toys was actually LESS expensive than the version WITHOUT the toys.

Buy Seasons 1 and 2 with 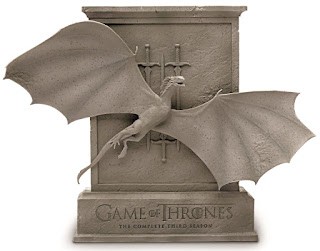 Funko figures from Amazon.
You will need a spot on your mantle for the unusual Game of Thrones Season 3 boxed set shown on the right. It contains the blu-ray disc/DVD versions as well as a digital copy of the series. 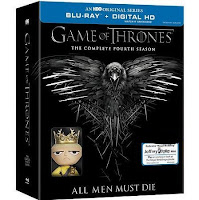 If you are just after the fourth season, you might choose the boxed set shown below which comes with the Joffrey Funko Royal Wedding themed mini figure. Receiving a bonus collectible with the movies makes the set more fun.  Buy Season 4 from Amazon.

A Game of Thrones Board Game 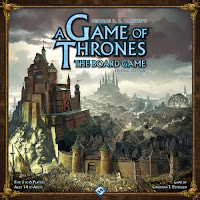 Make sure it's the second edition!

There are several Game of Thrones available but and we did a bit of research and picked this one, the Game of Thrones Second Edition Board Game, for our son, because it ranked a bit better than the first board game. We still cannot personally confirm that this one is better than the first, and I suppose that we might never be able to compare the first and second editions of the game since we may never own the first.

Reviews say things like, "All in all this is just a fantastic board game, especially for those who are a fan of the book and TV series. For those who aren't, it's still an excellent game in and of itself, and it might introduce you to one of the greatest fantasy series of all time."


A Game of Thrones T-Shirt 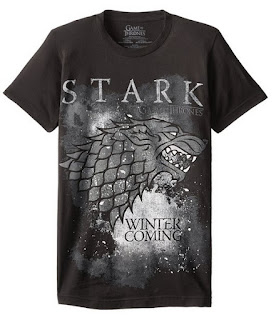 We love the gift of a Game of Thrones t-shirt because it is affordable and practical, something that will be used and enjoyed regularly in the same manner that a coffee mug will be. This is a very popular, officially licensed HBO t-shirt.

Our 'boys' (remember they are really young adults) found our HBO shirts to be appropriately sized width wise and just long enough though if the wearer wears his jeans really low and is tall, say 6 feet or more, perhaps a bit short. The fabric of the official shirts IS a bit thinner than many typical graphic shirts but we don't find that to be an issue, as some people do in the reviews. It is, however, something to be aware of.

If you are looking for a Game of Thrones gift idea, I hope I have given you some ideas. If I haven't provided quite the right idea, you can click right here to check out all of Amazon's Game Of Thrones gift ideas.