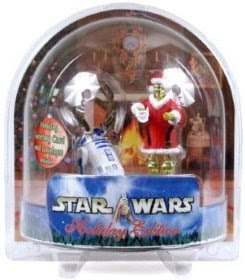 
The 2002 Holiday Edition C-3PO and R2-D2 set was a limited edition sold only through Wal-Mart stores and was the first in a series of Holiday Edition commemorative figures produced by Hasbro.

This collectible item was inspired by the 1980s Lucasfilm holiday greeting card art by Ralph McQuarrie, the concept artist responsible for much of the look of the original Star Wars trilogy.

The set comes with a display base and includes a full-sized holiday greeting card, if you care to open up the package though I expect many collectors will prefer not to open the packaging.  This action figure set would make a great and unexpected gift idea for any Star Wars fan, new or old.

Author's Note: This page was originally written in 2008 on another site.