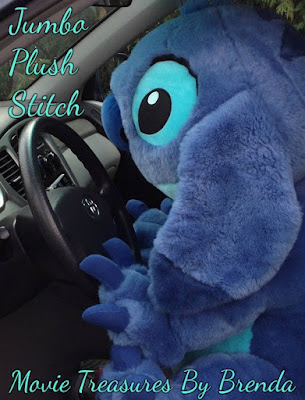 Disney’s character Stitch in the movie Lilo and Stitch is that of the main protagonist. He is chaotic and especially well known for his mischievous behaviour.

Stitch is the result of an experiment gone wrong and therefore is also called Experiment 626. Describing him physically is difficult. I have seen him called a blue dog and a koala style creature and I cannot do any better than that.

It is natural then that Disney released a mountain of merchandise for the movie and one of the neatest items that I have had the opportunity to come across is the jumbo plush Stitch toy from the Disney Store, as shown here driving my mid-sized SUV.  Yes, this stuffed animal version of Stitch really is big. He measures about 40 inches in height and he is very nicely made. When the Disney Store does something well, they do it really well and this version of Stitch definitely fits that category and was a worthy souvenir of the film.

Unfortunately, because of his size he was expensive even initially and therefore, fewer of this plush Stich were made. That means that he is hard to find now on the resale market and, if you do find him, he is going to be expensive and could sell for hundreds of dollars.

The Stitch shown in the picture above is the one that I owned. Unfortunately, he is gone as I sold him in my eBay store in 2013. The list below from eBay shows a few of the larger Stitch plush toys that are available right now on eBay. The results are not likely to show the jumbo one as words like jumbo and large are subjective and because the jumbo version is so rare. If you are shopping, whether for the jumbo version or something slightly smaller, do so carefully. Be sure to read the seller’s listing closely and ask questions.

I also checked Amazon today and see that there are sellers on that platform with numerous versions of the Stitch toy available but no 40-inch jumbo versions. If you like to shop on Amazon, you can take a peek for yourself now at Amazon's plush Stitch toys just in case one might be available today.

Do you love Lilo and Stitch, too?  Are you searching for a plush version of Stitch?