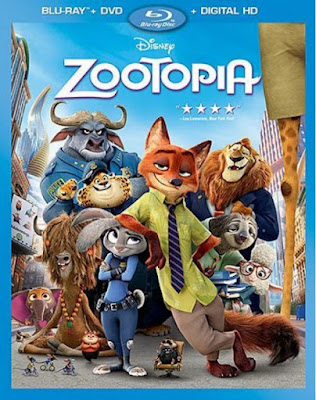 Well, it's here. Disney's Zootopia was released on Blu-ray, DVD and of course, Amazon Instant Video on June 7, 2016.  Is it a movie you will be adding to your collection?

Zootopia's success took some people by surprise. Mashable says that Zootopia was number 1 in its opening box office take, surpassing even the hugely successful movie Frozen. The movie was also successful globally, with the critics and the movie going public all of which are definitely reasons to look closer at this movie if you have not already done so.

I have long watched Jeremy Jahns's reviews though I have not seen one in a while. I am glad to say his review of Zootopia is family friendly although he is promoting a product. If you ignore that promotion, I think you will like what he has to say about Zootopia:

High-Def Digest says, "This Blu-ray has some stellar video, some very strong audio, and a healthy portion of extras. 'Zootopia' is highly recommended."

Order your copy of Zootopia from Amazon.