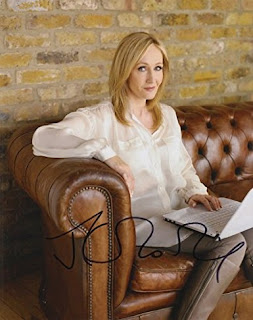 These facts are all from the opening scene of the 2010 Oprah Winfrey interview with J.K. Rowling. Some of them are dated; meaning that they have changed. We all know that J.K. Rowling has sold many more books since the year 2010. However, they are still fascinating facts. If you missed it, you can watch the Oprah Rowling interview here.

J.K. Rowling is the first self-made BILLIONAIRE author in history.

J.K. Rowling's books have been printed in 69 languages.

J.K. Rowling's books have been released in 200 countries.

Harry Potter book and the Deathly Hallows was the fastest selling book ever.

The Harry Potter franchise is the highest grossing movie franchise in Hollywood history.

Are you in awe of what J.K. Rowling has achieved? Are you thankful for her contribution to the literary world? Did her work have an impact on the lives of you and/or your children? I am, I am, and she did.  I look forward to hearing from you!