Fantastic Beasts and Where To Find Them Movie Review 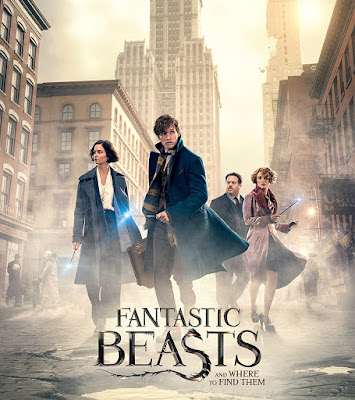 Kudos to J.K. Rowling and all of the folks at Warner Brothers who brought to life Fantastic Beasts and Where To Find Them on the big screen in November of 2016.  I went to the movie with trepidation. Would this new movie live up to the expectation of the fans and the reputation of the Harry Potter series books and movies?  I should not have worried; I totally enjoyed the movie. I don't often want to revisit a movie especially immediately after the fact but this is one that I could easily go and see again right away and I am betting that many fans feel the same way.  Fantastic Beasts really was that good.

The movie left me wondering if someone who was not plugged into the Harry Potter franchise would enjoy it as much as the rest of us did and I am not sure. Newcomers might but they definitely would not understand all of the insider references.  Since there are four more Fantastic Beasts movies to come, if you are keen and unacquainted, you might want to go back and read the Harry Potter books and then watch the movies.

Highlights for me were many but I know I laughed out loud quite a few times. I came away wanting some Gigglewater and a certain special umbrella for Christmas.  Gigglewater is a wizarding alcoholic beverage that may cause you to laugh out loud when you drink it though apparently it is a real term from the 1920s.

Fantastic Beasts and Where to Find Them is an enjoyable film, well done, that sets us up for four more stories.  Eddie Redmayne is outstanding as Newt Scamander, Dan Fogler is a good pairing as the no-maj Jacob Kowalski and Colin Farrell is good when he appears as Percival Graves, Director of Magical Security.  I also particularly enjoyed the sister characters, Porpentina Goldstein as played by Katherine Waterston and Queenie Goldstein as played by Alison Sudol.


You likely don't need it but just in case you do, here is the final trailer for the movie.


Fantastic Beasts is rated PG13. The Movie Mom says that it is given that rating based on fantasy action violence and she recommends it for middle school aged children. I think that is reasonable and this movie comes HIGHLY RECOMMENDED by me particularly if you are involved in Harry Potter's world.

The Blu-ray release date has yet to be released but I am sure it is coming anytime now. Meanwhile, you can pre-order your copy on Amazon with their price guarantee by clicking right here.