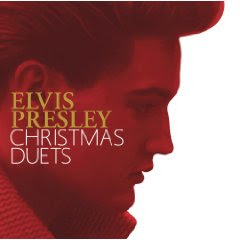 I loved the concept of old familiar songs by Elvis being refreshed by the addition of some of the best female recording artists in country music today. The likes of Martina McBride, Carrie Underwood, Amy Grant and Anne Murray offered up a new take on Elvis' music while honoring it at the same time.

Last year Elvis Presley Christmas Duets reached an amazing number 3 on the U.S. top country music chart. I do think that anyone who loves Elvis and/or country music would really enjoy this Christmas album.