Cooking With Stella ~~ Indian Food and A Movie 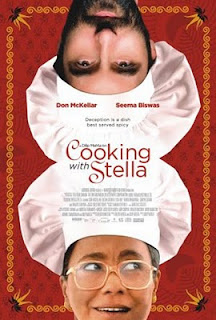 Another interesting foodie movie, Cooking With Stella, comes our way. It seems that food movies are all the rage right now. If you like food movies, as I do, then you are in luck. If you love Indian food, this latest one is definitely for you.

Julie and Julia, of course, was the most popular food movie of late although I would say that Ratatouille was in the running, too, as a very popular food movie but I suppose you could argue that the subject matter was a tad different as was the type of movie making them well, not really comparable.

Which brings us back to this new movie, Cooking With Stella. Interestingly enough, it has an Ottawa, Canada connection. (That's where I live.) It turns out that the story is loosely based on an Ottawa chef named Cameron Stauch and his family who spent a bit more than three years living in India. He was the stay-at-home Dad who did some cooking and catering. She was a Canadian diplomat assigned to Dehli. Their time in India became the basis of the story, Cooking with Stella.

Peter Hum, of the Ottawa Citizen, says Cooking With Stella "has an Upstairs, Downstairs dynamic" with the play of well-to-do visitors against the poor household staff.  The story centers around the father, Michael, who loves to cook and Stella, an employee of the Canadian diplomatic corps, who has watched couples come and go for years while she continues to work in the same dead-end job. There are a few struggles at first but when Michael asks Stella to teach him about Indian cuisine, she warms up and the story is on. Of course, that's not the whole story, there's a little bit of scamming involved and some trouble ahead...

I have not seen Cooking With Stella yet but it looks and sounds like a beautiful movie with great scenery and great food. Katherine Monk, also of the Ottawa Citizen, gives this movie three stars and says that it is "easy to watch and a cinch to digest. It's also guaranteed to make you hungry." I think I will make it a date ~~ the movie followed by an Indian meal at my favorite local Indian restaurant.

Searching For The Best Food Movie?

Brenda, you find the most interesting movies, and this one certainly does qualify!