Are You Ready For Russell Crowe as Robin Hood? 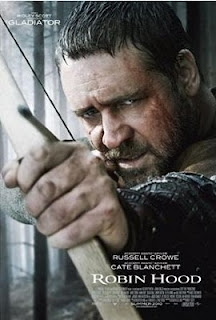 I am trying to picture Russell Crowe as Robin Hood and I'm coming up...empty. The latest version of the story opens at the Cannes Film Festival tonight and in theatres in North America on Friday.

I've heard there won't be tights and there will be lots of action.  So I'm off in search of some more information about the movie.  Let's start with the official movie trailer...

Well, I think that Russell Crowe actually manages to look like Robin Hood (rather than like Russell Crowe) in the trailer. That's a good start.

This Robin Hood movie definitely promises to be different than previous movies.  The trailer is loud and the movie is obviously more of a 'Gladiator' or action movie than it has been previously. I'm curious to know what it is rated, sometimes the fighting in movies gets pushed too far for my liking.

This story features Robin Hood returning from the Third Crusade and finding that the Sheriff of Nottingham has caused corruption and oppression in his village.  Robin gathers rebel forces to revolt against the Sheriff, which of course culminates in an epic confrontation with much swordplay and arrow-launching.  (My husband and teenage sons are going to love this one.)

What do you think? Does Crowe manage to look like Robin Hood? Does this band of merry men intrigue you?

I am not sure about this current version of the movie - I am not a Russell Crow fan, and wonder about Cate Blanchett's part in this, too! I don't know who else I'd cast. . . maybe I am too attached to the Kevin Costner version of this movie.

You know, I often think about that. Who would I cast in a movie? Many of the big male names in Hollywood are firmly branded in my brain as themselves. For instance, Kevin Costner is Kevin Costner, I have to get past that when I watch him in a movie. More recently, I experienced the same thing with the new Sherlock Holmes and Robert Downey Jr.