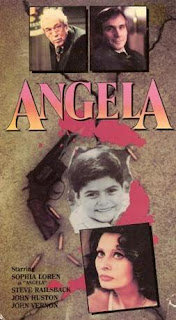 I've been working my way through a bunch of older movies lately and recently found myself watching Sophia Loren's Angela. Angela is a gritty and I expect low budget joint Italian/Canadian movie, which was filmed in Montreal, Canada.

If you watch it on VHS videotape, you might be excused for thinking that the quality of the tape was poor. However, I learned that the original film was not particularly well done and that the DVD naturally passes along that film quality.

So why the heck then, you might be wondering, am I writing about Angela?

I think Sophia Loren did a very good job as the aging mother and her co-star, Steve Railsback, also did a fine job as the love-struck young man.

Anyone who enjoys Sophia Loren should watch this movie and see how she performed. If you love mob movies and tense dramas, you might also add this movie to your list of movies to see. Just be aware that it deals with mature subject matter.