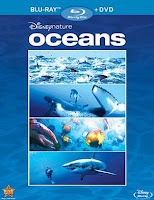 Disneynature Oceans arrived on blu-ray and DVD on October 19, 2010. A beautiful documentary film for which the blu-ray was NOT a disappointment.  The experts raved:

"No matter how you look at it, the Blu-ray edition of Oceans is a must-own," said Blu-ray.com.

Take a peek and see for yourself: