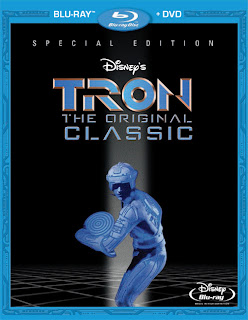 MOVIE RUMOUR: The first Tron movie is coming to us on blu-ray and DVD in March or April. Renamed Tron: The Original Classic, it will also feature new cover artwork.

The HDR Room reports that Disney has been hard at work restoring the first Tron movie since last fall.  It appears that Tron will be sold on blu-ray disc with the DVD version as one of Disney's typical combo packages.

Of course, if all of this talk of Tron on blu-ray has you wondering when Tron: The Legacy will be available on blu-ray, you should not have to wait long. Online speculation has it that both movies will likely be released on blu-ray and DVD at approximately the same time.