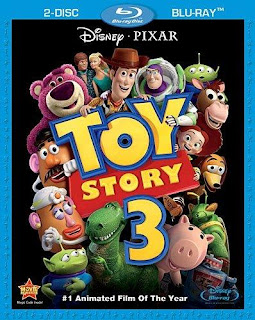 We finally put the Toy Story 3 blu-ray disc that I received for Christmas in the blu-ray player this weekend and we were WOWED.

It was funny...and the quality of animation was truly AMAZING. (No wonder Toy Story 3 made the list of the best blu-ray movies from 2010.)

The story, however, was overwhelmingly sad for at least one member of our family and I was not prepared for that. Mind you, I knew that people thought it was going to be a sad film because it was the end of an era for a certain generation.

My son's girl friends were quick to tell me that this movie IS about THEM.  They grew up with Toy Story and this is their final year of school which means that they, like Andy, are off to college this year.

However, I don't really remember my sons being big Toy Story fans. Oh sure, they knew Woody and Buzz Lightyear and they could "to infinity and beyond" as well as the next child, one son carried a wicker cowboy hat all the way to the Woody's Roundup at Disneyland in California so that he could dress up as Woody and none of us will ever forget seeing REAL little green army men while eating our lunch at a diner at that same park in California.

But Toy Story wasn't a movie that we owned and it wasn't one we saw more than maybe once or twice and lo and behold my son wasn't blown away by the fact that it was the end of the franchise but rather that the toys were so poorly done by...this from a young man whose childhood bear is bearly (misspelling intended) attached by a thread...

Anyway, I had no idea that this movie would be such an emotional roller coaster.  I laughed and enjoyed myself while my son grew sadder and sadder...

The next day I asked him if I could sell the Toy Story 3 blu-ray disc in my eBay store figuring there was no way he would EVER want to watch THAT movie again...and he said a resounding "No!"  Go figure!

How about you? What did you and your family think of the Toy Story 3 story?

Order your copy of Toy Story 3 from Amazon.
See the movies available in my eBay store.