Grease IS Available On Blu-ray Disc 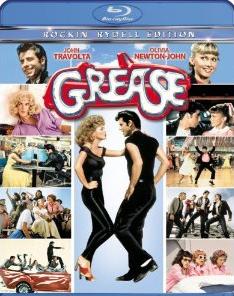 This weekend we went to see the movie Grease at the Mayfair Theatre in Ottawa. The Mayfair is a vintage movie theatre that offers its facilities for rent during the day for fundraisers and my son's Grade 12 Canterbury High School drama class was hosting a showing of Grease.

My husband and I enjoyed the 1978 film; I am not sure my son was as enthusiastic.  For us (or at least for me) it was a journey back in time. Judging by his somewhat lukewarm response, I would say that Grease is not for your average teenage guy, even one who enjoys musicals and drama.

All of the music from the Grease soundtrack is music that was popular when I was younger...and of course, Grease is a movie that I have seen once or twice before.

Watching Grease raised several questions in my mind like how-the-heck old was Olivia Newton-John when she played Sandy?  My brother-in-law was kind enough to point out that she was 29!  Unbelievable! I mean, she looked older than a senior in high school -- heck my son is a high school senior and there's nary a wrinkle on his face -- but 29 is really 'old' for that role.

And then I discovered that Stockard Channing was 33!

Both women had absolutely amazing voices but I  really don't believe that they would cast individuals that are so 'old' in a movie as such a young person today. Do you?

Anyway, we were watching a well-loved copy of the film at the Mayfair and I found myself wondering if there is a blu-ray version available and, lo-and-behold, there IS.

What then of the quality? Is it a movie I should be adding to my blu-ray movie collection?

I consulted with my favorite movie resource, Blu-ray.com, and they said that the quality of the blu-ray IS worth an upgrade for Grease fans. Of course, at $14.99 on Amazon (just $1 more than the DVD price) you might as well buy the blu-ray disc unless, of course, you don't have a player.

Order your copy of Grease on blu-ray or DVD from Amazon.