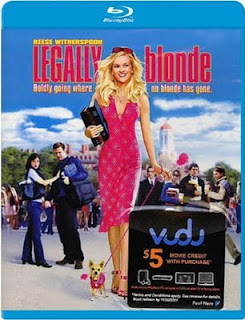 LEGALLY Blonde is a seriously light and enjoyable comedy movie from 2001.  It stars Reese Witherspoon as a fashionable university student named Elle who has it all, at least until she loses her boyfriend (played by Matthew Davis.)  Her attempts to win back her young man find her enrolled in law school and surprising us all.

LEGALLY Blonde was generally well received placing at number 29 on Bravo’s 2007 list of the top 100 funniest movies. Reese Witherspoon even received a nomination for Best Actress in a Motion Picture Musical or Comedy.

Believe it or not, I did not see it until just now and I can say that I thoroughly enjoyed it.  It has a sad moment or two but mostly is funny and it will also have you routing for Elle.

Little information is available about the blu-ray version of this movie although it was released on July 5, 2011 and is available.

Now, I expect I will have to check out the sequels, LEGALLY Blonde 2: Red, White and Blonde and LEGALLY Blondes, which was not released at the movie theatres but instead was released to DVD.

Order your copy of LEGALLY Blonde on DVD or blu-ray from Amazon.