Meet The Muppet Walter & Check Out His Kermit the Frog Watch 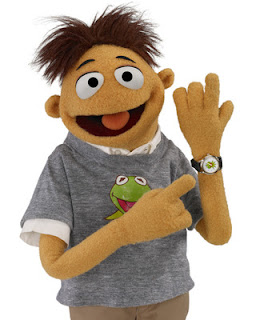 We were thrilled with the 2011 reboot of Disney's Muppet franchise and with Walter, the newest Muppet Character.

Walter is a quiet guy, sweet but lacking in confidence, perhaps because he has never quite fit into the human world.

Walter has a wonderful and very supportive older brother named Gary. (Played by Jason Segal.)  Gary has always been there for Walter, as big brothers often are.

Walter is, as might not be surprising given the fact that we are talking about a Muppet movie, a HUGE fan of Kermit The Frog because he somehow manages to relate to him. When offered the chance to visit Los Angeles, he is delighted because he will finally be able to visit the Muppet Studios.

While in LA. it becomes clear that Walter, his brother Gary and his partner, Mary (played by Amy Adams) are going to have to help save the studios from imminent desctruction and to do so, they must enlist Walter's hero, Kermit the Frog.

You can wear a Kermit The Frog Watch, too. Check out Amazon's collection right here.