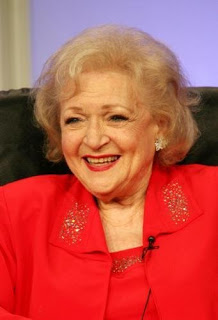 E-Poll Market Research named celebrity Betty White America’s most-appealing celebrity. She beat out Sandra Bullock and Tom Hanks for the title in a survey of 1100 people that ranks 7500 celebrities.

She's been acting since 1939 when she appeared in The Merry Widow and she is still acting today, currently being seen in Hot in Cleveland and on Betty White’s Off Their Rockers.  In 2010, she hosted Saturday Night Live and was  Entertainer of the Year.

I am in awe of this energetic 91-year old. How about you? Are you a fan?

Email ThisBlogThis!Share to TwitterShare to FacebookShare to Pinterest
Labels: 2013, actress, betty white, celebrities, celebrity, hot in cleveland, off their rockers, the merry widow