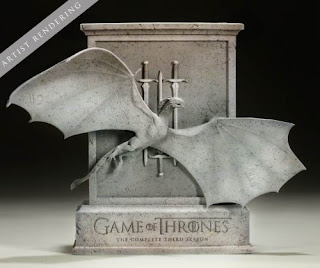 Look what I found: The Game of Thrones: The Complete Third Season Limited Edition exclusive set.

I watched and often covered my eyes during the first season of the series and I have the second in the house waiting to be viewed and cringed at, LOL.  This is not a series that I would recommend for the faint of heart nor for the easily offended.  It contains a lot of violence and sex but obviously it does have a good story, which has hooked hoards of watchers. I read that the finale drew 5.4 million viewers.

This Season 3 set isn't even going to be available until February 18, 2014 but it is already available for pre-order on Amazon with Amazon's usual guarantee so you won't have to be worried about the price going down. This set will contain the blu-ray, DVD and digital versions of the movie. Of course, more basic sets will be available with just blu-ray or DVD discs. You will find all of the versions of season three that Amazon is offering click here. Too bad it will be too late for Christmas gift giving in  2013 but still a release that will be highly anticipated by many Game of Thrones fans with the blu-ray version likely highly recommended by blu-ray experts, too.