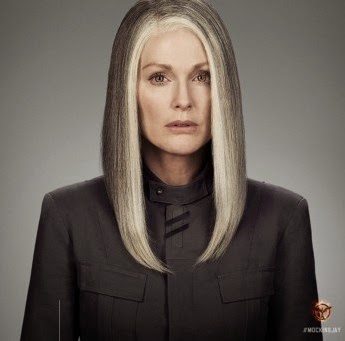 We're starting to hear and see more information about the next installment in the movie version of the Hunger Games trilogy, Mockingjay.

Academy Award nominated Julianne Moore plays President Coin.  On this brief video she talks about her love of the books and determination to be in the movie, about the Mockingjay movie and about her role as the President, which she says is the only role that she could have played.

Is Ms. Moore lucky to have this role? Well, perhaps she is but I believe that her acting talent probably had something to do with it, too.

Julianne Moore is a British-American actress and a four-time Academy award nominee. One of her earliest roles was on a daytime soap opera, As The World Turns and one of her more recent efforts is The Kids Are All Right. I believe The Kids Are All Right was somewhat of an unexpected hit, emerging from Sundance and going on to great critical acclaim. I'll look forward to seeing her as President Coin in Mockingjay.

Anyone else anxious for the next movie?

See you there!
Brenda