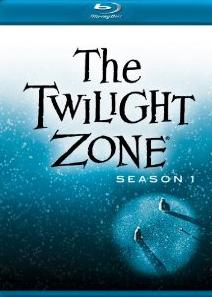 The Twilight Zone, Season One, took the seventh spot on my list, the Top 10 Best Blu-ray Movies 2010 For Sound and Picture Quality.  It's a television series that, more than fifty years later, still has a large following.

The set contains 36 episodes for which the video and audio have been restored and which are reported to be better better than ever.

With regard to the quality of the blu-ray release, the experts are thrilled.

Monsters and Critics says, "Extremely highly recommended and worth every penny."

And finally, Blu-ray.com says, "If you love television, science fiction, fantasy, horror, time travel, Cold War craziness, snappy twist endings, the realm of the unknown, or all of the above, this is an absolute must-have release."

I'm not sure that there is anything I can add to that...but I'm thinking I should add it to my Christmas shopping list for my teenage sons.

Order your copy of The Twilight Zone, Season One, form Amazon.
Read the Top 10 Best Blu-ray Movies 2010 For Sound and Picture Quality

Ooh, I think my dad would like this Twilight Zone DVD!